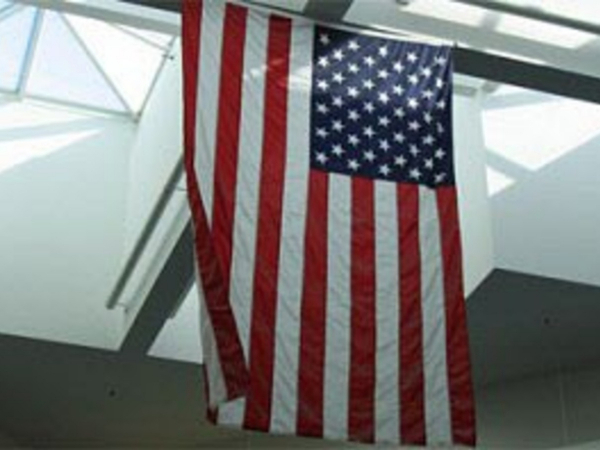 Preface: This year, work that I began five years ago as a sweet, kinda Zen, kinda Buddhist, kinda Oakland-based meditation center with an emphasis on both the spiritual needs of western/convert folks of color and relating spiritual practice to social justice, has come to its the natural end. What arose organically from peering through these dual lenses was the recognition of the need for something even deeper, more expansive, and more unified. As a result, we stepped back and have re-emerged as an institutional home for what we now call "transformative social change."

In the first newsletter of the new Center for Transformative Change, a strange thing happened: a great big American flag ended up looming over our welcome section. It was a picture I took at the airport in Jacksonville, FL after a 2004 Election Protection campaign. You remember, don't you? The last presidential election was all about Florida because that was the scene of the year 2000 crime that gave America a president that many of us couldn't or wouldn't call our own.

Looking back, it seems strange that I even took a photo of a US flag. After all, I've identified less and less with the flag, being American, and even America itself, since my 4th-grade protest of the "Pledge of Allegiance." Like a good social justice practitioner, I recognize the privilege foisted upon me because I was born a US citizen whenever I leave the country. Even if my rights aren't well-regarded when I'm here at home, I do (still) get special treatment elsewhere in the world. Personally, though, I was one of those heathen "unpatriotic" Americans that, far from feeling a swell of pride whenever "Oh, say can you see..." was belted out by the latest pop star on a football field, felt a burdensome combination of shame and irritation. Shame because from sea to shining sea, America stood for something far from liberty and justice for all. Irritation because apparently a bunch of folks still think if we don't wave the flag until our arms fall off and stick little pins on our lapels, we're Enemy Combatant #1 and should get ready for an all-expense-paid trip to Guantanamo for a little waterboarding excursion.

So you can imagine how strange it seems to now reacquaint myself with what it means to be American.

But here I am...here WE are. A scant 8 years after "we wuz robbed" of what should have been the first Green President, we've got the first Black President. Having in Al Gore a President that would have acknowledged our path of environmental destruction Katrina could have restored faith for some of us, but having a post-9/11 President with an Arabic name meaning "blessed" is too much for even the most hopeful of us to have ever anticipated. Does anyone think that whoever is pulling the switches behind the curtain of the Universe doesn't have a sense of humor?

After Obama's election, I quickly realized that I wasn't alone in my arms-distance relationship to being American. Over and over again I heard people--conscious, justice-seeking people: black people, white people, poor and privileged, from behind the scenes and on the frontlines--each on an outbreath of relief say: "I can finally be proud to be American."

On the one hand, 2009 brings with it the incredible challenges of the freefall of an economic house of cards built with smoke, mirrors, and lots of dishonest spit, an unjust war built on outright lies, and a devastating attack on a people that the world can no longer deny being on the short end of a harsh stick, built on a 60-year theft. On the other hand, we are embarking upon a new year, a new era, and a strange, new hopefulness that real people, tired of being polarized by fear, hate, and separation, can organize for hope, progress, and change. And together, our collective will can make a difference.

I debated taking that flag image out many, many times. But it stayed. And for now, anyway, I stay. I stay here to reimagine and fully claim to be American because I can finally exchange some of my stalwart commitment to see change happen for an actual experience of change is possible.

And it's a change I can believe in...imagine that?