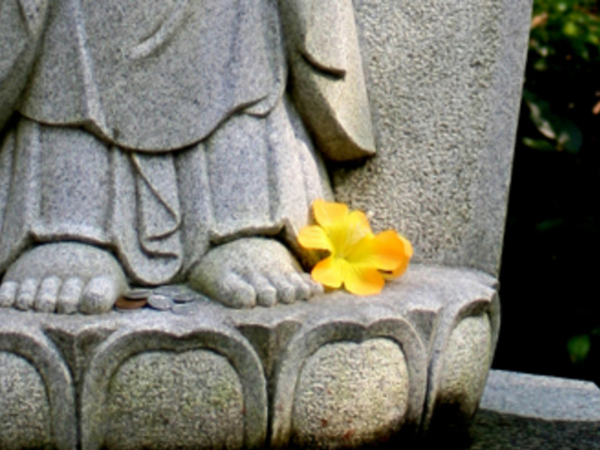 You are here: Home / essays / The Greatest Transformation

I am convinced that it is not the fear of death, of our lives ending that haunts our sleep so much as the fear... that as far as the world is concerned, we might as well never have lived.” —Rabbi Harold Kushner

In this past month, two things became clear: any commitment to writing about transformation calls for a“addressing the greatest transformation any of us will make at least once. The second thing is that we live in a culture that celebrates eternal youth, never-ending life, and an insatiable thirst for immortality. Conversely, we avoid that greatest of transformations, known as Death, as a natural and inevitable rite of passage. Death happens daily, yet most of us are largely removed from it, safely positioned on the passive side of our computer and television screens or the printed page.

Thus, when faced with it or its pending probability directly, we are woefully under-equipped to negotiate it. Here is a sampling of reflections, learnings & resources for the journey all of us will eventually take: LOSING GENIUS Two deaths, in particular, have impacted me greatly this month. One was that of my naturopath, Dr. Cecilia Hart. The other, was, of course, Michael Jackson. Both were unexpected, felt too sudden, too soon, and riddled with questions of “how can this be?” They were both young. Both Virgos. Both committed to Heal the World...and both so clearly in need of their own healing.

One has become intimate and full of personal responsibility in a way that I would not have expected. The other has been far away and collectively held in a way that I would have hoped for. In losing Michael Jackson, who without a doubt embodied the most complex relationship we, the people have with celebrity and celebrity has with itself, my soul brother Greg Tate captures it best: “What Black American culture—musical and otherwise—lacks, for now, isn't talent or ambition, but the unmistakable presence of some kind of spiritual genius: the sense that something other than or even more than human is speaking through whatever fragile mortal vessel is burdened with repping for the divine, the magical, the supernatural, the ancestral...” a moving and prescient poem by Alice Walker written in 1991... from Natural Star - for Michael Jackson I am in mourning For your face The one I used to love To see Leaping, glowing Upon The stage The mike Eager... Thrusting In your Fist. I am in mourning... http://www.alicewalkersblog.com/2009/06/natural-star-for-michael-jackson.html In losing Cecilia, who helped guide my health back into balance after discovering dis-ease, I’ve lost, for now, my health insurance: insurance against a system more concerned with medicating than healing even as it denies access to the basic right of health to millions.

She belonged to the growing legions of naturopathic doctors, alternative healers, complementary health practitioners, chiropractors, and more that stand up to legitimize healing practices that affirm wholeness and well-being, rather than dividing our whole bodies into separate problematic parts to be conquered one office visit and co-pay at a time. After she died, the mystery of her notable slowness was unraveled. Unbeknownst to the clients that read untold pages of books waiting for her, Cecilia literally prayed over each herb, pill, and powder to activate the healing energy of that vehicle.

She called forth the power of those potions to be in the right relationship with the body they would be in. She helped me and many others reclaim our health and restore confidence in our innate ability to heal ourselves through better relationships with our body-minds. A lifelong teaching every one of us can practice today. WRITE IT DOWN Both Michael and Cecilia's Deaths were also painful reminders that we live in an increasingly litigious society wherein the dispensation of our property, our children, even our very bodies is governed not by obvious relationships and moral rights but by strangers behind desks and in robes wielding a legally ordered bullet list that divvies out dominion in a way that may defy the truth of our life choices of family, partnership and love, so:

CONNECTION & COMMUNITY What matters most is what I’ve learned about the difference between connection and community and how desperately important knowing that difference is for not only our lives to be good ones, but more importantly for our Deaths. In an ever-connected, internet-worked world, our Facebook can be thick with Friends, we can be LinkedIn to a web of Connections, our Twitterverse can grow exponentially with little effort. With one simple login, we can create our own private Big Bang.

We can scroll a ticker for updates on the status of friends and family, gaining tiny glimpses into the lives of the vast network of people we know intimately, loosely, or not at all. Who needs to shout out when you can just tweet? In 120 characters or less, we can be teleported into a virtual visit into someone else’s now. But when Death comes to Friend you, as it will, you can’t ignore it. Where will your vast but virtual network be then? Will they be there to sing songs, share stories send your ashes back to ashes, and dust back to dust?

MEDITATE ON THE WAY In many traditions, words for healing and words for Death are the same. Wherever our journey of life and death may take us, the path should be paved with encouragement, equanimity, and ease: powerfully soothing healing and “death-conquering” mantra sung by Hein Braat and often mistaken for HH XIV Dalai Lama by way of urban legend the maha mrityunjaya mantra [youtube=http://www.youtube.com/watch?v=buYFPZuiZHc&hl=en&fs=1&rel=0] http://www.youtube.com/watch?v=buYFPZuiZHc excerpt from a reading meditation I offer for the sick, dying and dead on the in-between state leading towards Death...

Great Liberation Through Hearing While In Transition modified from Tibetan Book of the Dead for Reading Aloud by Jean-Claude Van Italie and Tibetan Book of the Dead by Chogyam Trungpa Rinpoche TO FRIENDS OF THE DYING Oh you, who have come to this place, Sisters and brothers, friends, This person is dying. She has not chosen to do so. She is suffering greatly. She has no home, no friends. Falling as from a cliff, She is entering a strange forest Driven by the winds, swept by the ocean, She feels no solid ground. She is embarking on a great battle. Moved from state to state, She is alone and helpless. Embrace her with your love. THE MOMENT OF DEATH My friend Now is the moment of death. The time has come for you to start out.

You are going home. Oh, Nobly Bord, Now is the moment. Before you are mind, open and wide as space, Simple, without center or circumference. Death has happened. It happens to everyone. Perhaps the greatest opportunity you will ever have in life is to choose how you meet your Death. But without a doubt Death itself is the greatest transformation you’ll ever make. May you go well. Rest in Peace, Michael. Rest In Peace, Cecilia. May you each be liberated. May all beings be happy. May all beings be free.